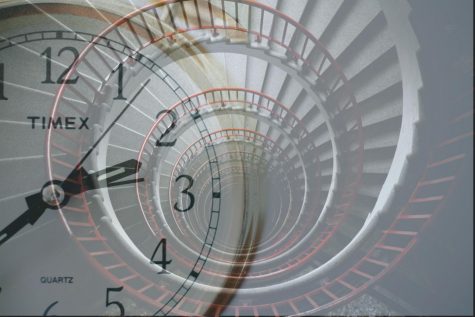 A world in which the Time loop didn't happen

April 7th, 2120. A torso with its head on a workbench, its arms and legs absent. Ordinarily this would have been concerning, but that was not the case here. This was a Sentinel: a sentient machine created for the defense of Fortitude. This one in particular went by the name of Jaren. He was currently wide awake, looking at a man in a grey lab coat as he darted back and forth across the room.

“Hey Josef, you just about finished over there? It feels weird not having any limbs…” Jaren asked the man across the room.

“That’s Doctor Josef to you!” Josef shouted. He spun on his heel to face the immobile Jaren as he said this, “And yes, they’re finished,” he sighed. The stress of work had clearly taken its toll on the doctor, evident by the lines across his face and greying hairs. Even so, Josef had yet to take a day off. This was a subject his co-workers messed with him about, joking that one day he would cash in on all the paid leave he had accumulated over the years, and go on a decade long vacation.

“Do you want the mods or not?”

“They cost me a fortune, so I better! Seriously, no friends discount?”

Josef shook his head, a rare amused grin decorating his face. He picked up the modified limbs and moved over to where Jaren was currently stuck, and installed the arms. They instantly powered up, connected to a power source. Jaren gave them a few experimental movements, smiling as they responded as desired.

“They should give you a little extra punch in a fight, and they have the reflective vents you requested. Be careful about using them, as prolonged use can lead to overheating, even with your cooling vents,” Josef informed.

“Aye aye, cap. Now, could you help me put on the legs too, or do I have to do that on my own?” Jaren asked.

“Nope, I put your arms on, nothing more.”

Jaren reached down to put his legs on, finding no small amount of difficulty attempting to do so. After a long and painful struggle, he managed to install both legs correctly. He jumped off the bench and walked around the room, giving a few kicks to get a feel for them.

“They work great Doc, thanks again!” he thanked Josef. Josef waved him off, and turned back to the now empty bench.

“Good to hear, but I still got more work to do. Get out of here, you’re a distraction,” he said while shooing Jaren out the door.

As he exited through the door, Jaren turned back to face the Doctor once more.

“Hey,” he called, grabbing Josef’s attention, “thanks, I owe ya one.”

“Ya already paid me, now get outta here,” Josef dismissed.

Having just gotten his new limbs attached, Jaren thought to take a walk outside the city. There was a nearby forest, and this time of year, it would be especially beautiful. A majority of the trees were flowering, so blooming colors made the place truly a sight to see. Due to how close the forest was to the city, not a lot of wildlife would be around. That would be fine, as Jaren was not going birdwatching. With a destination in mind, he set off to the edge of Fortitude.

The new limbs were working out incredibly well for Jaren. As opposed to his older arms and legs, these seemed to run much smoother, and they also absorbed most of the shock from taking a step quite well, making the walk that much more comfortable. Josef also mentioned that they were designed to be able to “take a beating and still dish it back twice as hard,” so the durability would not be a problem. He had gotten them to be painted a dark shade of a metallic grey, just enough to be slightly reflective. There were no real major decorative features, mostly due to the fact that Jaren would likely replace this set at some point. Still, he thought, The old man is getting real good at making these. He practically made it like I’m walking on clouds! Smiling to himself, Jaren kept walking deeper into the foliage with a spring in his step, admiring the vibrant springtime scenery. He eventually came to the forest’s edge, signaled by the sudden lack of trees. He now stood on top of a cliff face that overlooked the city of Fortitude in all of its glory. He took a quick glance at the sky, noticing that sunset was fast approaching. As the last of the sun’s light fell on the towering skyscrapers and majestic constructs, the whole of Fortitude reflected the golden light off of the many panes of glass that the architects seemed to love using. Jaren couldn’t complain, as the view was one that would have taken his breath away if he had the need to breathe.

“This view never gets old,” he whispered to no one in particular.

Letting out a contented sigh, he sat down in the shade of a tree, taking in the sights of the now golden city, the vibrant colors of spring, and just to make it more relaxing, a gentle breeze. Any normal human being would probably take a nap here, as the conditions were pretty ideal. It was just the right temperature, the ground was comfortable enough, and nothing would disturb their sleep. Jaren was no human, but that did not matter in this situation. He may have been a machine, but he was still human in the way it mattered the most, and that was enough for the land to lull him to sleep here. Just 20 minutes, I’ll still make it back before dark… Jaren thought, and was immediately afterwards taken into sleep’s warm embrace. This evening would mark the start of a terrible fate for Jaren, but not in this timeline, for this time, the fail safes on a highly experimental device under project Temporal Sprint, would work correctly and shut down the device.

Project Temporal Sprint was started to create a machine that would allow for time travel. Due to the nature of what was being experimented with, this project was extremely dangerous with potentially catastrophic failure scenarios. It was fortunate that this was not the case here, as in this timeline, the scientists made sure to check the fail safes one last time before starting the trials. This was only one of many possible timelines, all created by the device failing in the original. What happened that caused it to fail there? Sabotage perhaps? Maybe incompetence? Or, it could have been just a stroke of particularly bad luck.