Where Have All The Good Toys Gone?

Is video game merchandise outdated or do we just need some new ideas? 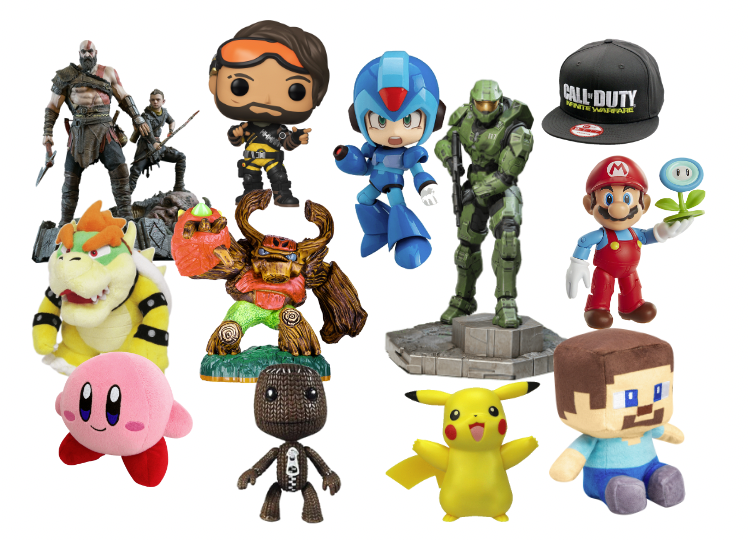 Video games really kicked off in the 80s. There were tons of arcades spread around the United States and other places like Japan. We were also introduced to the amazing Nintendo Entertainment System or NES. There were very memorable characters we all know that came from both arcades and also the home console: Mario, Pacman, and Mega Man are great examples of classic characters that still hold a prominent role in gaming culture today. But as we progress through time, and the technology of home consoles improves exponentially, so does the quality of games themselves.

If you take a look at some of the big title games of today, you would see: “Ghost of Tsushima”, “Call of Duty”, and “Grand Theft Auto”. While the last example may be a little dated, the many sequels and iterations make it relevant. Despite how iconic those games are, they have little to no merchandising…

I think it has to do with the looks and styles of the games. I personally feel more flexible when it comes to video games because unlike cartoons, both silly designed and serious designed games can coexist with one another nowadays. Nintendo, Sony, and Microsoft have dominated the video game industry and while Sony and Microsoft rival one another in console performance, game quality, and franchise licensing, Nintendo is in a league of its own.

Younger kids are Nintendo’s target audience, but in reality everybody loves Nintendo regardless of their age. The thing that makes Nintendo universally popular is that it presents such a diverse collection of characters. Because these characters are so iconic, they are able to profit off of merchandise and create spin offs or even movies and television shows.

Mario is well known for his successful franchise all over the world. From that acclaim this Italian plumber quickly became the face of Nintendo. What’s interesting to think about is that Mario has really drifted from his humble beginnings. He’s headlined tennis games, racing games, 3D games, and role playing games just to name a few. The reason why none of that seems odd is because of how creative that franchise is: humans, mushroom people, turtle people, and anything you can imagine as long as it has a face. So with all these characteristics and elements to the franchise, it wouldn’t be surprising to expand on a couple of them or have a game where all these loveable characters get the spotlight. Mario is a transcendent character.

Even as mascots are one of the most significant components for a successful brand, Sony and Microsoft still have nothing. While their games have iconic characters like Kratos or Sackboy for Sony, Master Chief and Doomguy for Microsoft, neither company utilizes those characters like Nintendo. Every attempt they have tried has failed… but why?

I want to specifically look at Kratos and Master Chief. Kratos from the “God of War” franchise and Master Chief from the “Halo” series. They both look cool for the most part, but what truly links them in my mind is how similar they are to each other. I’m not talking about personality or story. They are humanoid and realistic. It makes it hard for them to stand out in the eyes of people who have no idea who they are. There isn’t much of a hook to their looks. And with the strictly human design of these characters, any other thing that involves them would seem out of place.

Sure you could bring up the argument that they have a world built with them and a continuous story in that world. Which I understand, but you can still have a balance between a franchise that has a restricted universe and a franchise that’s more loose, imaginative, and chaotic with its world. As long as the loose franchise is promoted well and becomes a simple face of a company. But so far… I’m only seeing that from Nintendo. Even then they can still profit off of merch and spinoffs from the Zelda franchise which is known for its story filled world.

I find it frustrating because games like “God of War” can only work if its beautiful and realistic and if it were to have a silly stylistic design, it would lose its meaning and wouldn’t be taken seriously. The best types of merchandise you can get from a game like that are statues, item replicas, and expensive articulated figures. Which can still count as successful merchandise… but that’s about it, and even those feel less active, they’re just things to set on a shelf and look at.

I wish they were able to make all these cool figures, plushes, and collectibles. Then again, kids really get toys (rarely nowadays HAHA…hah…☹️) and these games are targeting a mature audience, so it makes sense for them to make most of their merchandise clothing or accessories rather than toys. Still, that begs the question… how come they haven’t utilized their more childish franchises for toy merchandising?

Well to be honest… I don’t know…

Let me clarify that this is mainly directed at Sony because they have a clear roster of franchises, Microsoft is a bit more confusing (and besides, they’ve handled the toys for Minecraft pretty well). Around a decade ago Sony attempted to make toys based on the “Little Big Planet” franchise, but it failed sadly, and as far I know they never really made any more attempts at toys since then. A big reason why I think it failed is that Sony did little to nothing to promote them, and they just kind of appeared on shelves at some point. Another reason could be that Little Big Planet’s success was declining and despite the game having a cute and simple character, he was pretty much the only actual character in the game.

With Little Big Planet being put to rest for good, Sackboy, a side character in Little Big Planet, lives on in a new game called “Sackboy: A Big Adventure”. This game seems to flesh out a new world with all these inventive characters and the overall game just looks welcoming in general. With the way the game has presented itself, I’d say it’s perfect for all sorts of toys especially since its target audience is young people and the characters look so unique. Will Sony make toys based off the game? I guess time will tell.

As the future for toys overall doesn’t look so good, the future of video game toys looks pretty bad too. Despite the designated audience being children, most of the toys cranked out by Nintendo are mainly bought by older people who still hold onto their love for the franchises (like me) while companies like Sony mainly focus on more practical forms of merchandising directed at the same adult collectors. With a better line of creative games coming out for the next generation of consoles, there’s plenty of room for cool merchandise, it’s all just a matter of IF that merchandise will ever be made. I mean c’mon… New Sackboy figures would be awesome.