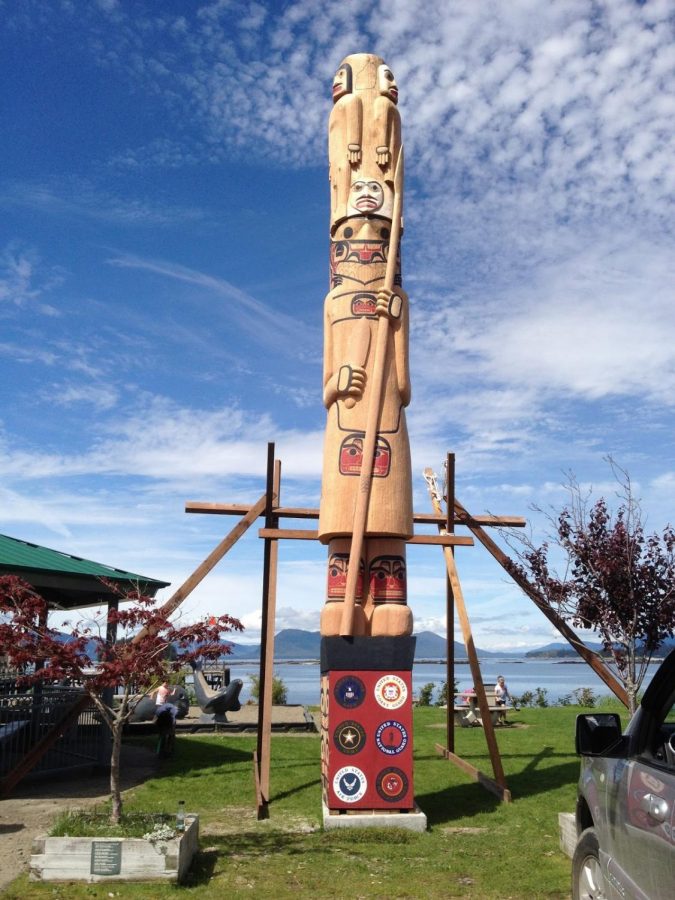 If you’re from Southeast or from Metlakatla, Alaska you’ve seen Wayne Hewson’s totem poles around. But little did you know that his wife Toni Hewson has helped him with thirty-eight of those totem poles. Toni and Wayne are the first people to carve a totem pole on a cruise ship. They were on a cruise ship carving, telling stories, dancing and singing, and informing people about our culture. Toni is one of very few women totem poles carvers.In fact, the totem pole at the ballfield is one that I’ve helped with. Wayne and Toni trusted me to paint some of the lips and paint some of the black  on the navy part of it. This totem pole appreciates all of the veterans in almost all branches of force. It’s such a beautiful totem pole and I’m beyond proud to say that I was a part of it and could help!

Toni Hewson as a little girl was very shy and shut out from the rest of the world. Her mother Stella Jacquline Slater was very strict and took her from place to place and then home when she had things to do. Stella tried to keep her baby girl from the world so she could be protected. 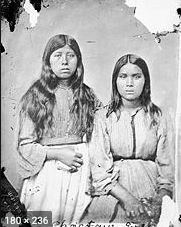 Stella and her  family were Chactaw, and Blackfoot Cherokee type of Indian. She was one quarter percent . But, her mother Stella was ashamed and didn’t want to let people know she was native. This one time they were at a gathering, and they said they natives could go grab peanut butter and bread. Slater  was too embarrassed and afraid to show others that she was native. She wanted to keep it hidden. It wasn’t until 1974, Toni, Wayne, and her mother were at an indian gathering and they asked all the natives to stand up. Stella gladly stood up with her daughter Toni and her son-in-law Wayne. Toni said, “When I met Wayne and I got involved with his culture it helped mom be more involved and proud to be indian. It was almost as if she had come out of her shell.”

Toni Hewson and her family moved here to Metlakatla  in 1975 because she escaped an abusive husband and her parents had jobs here. Her older sister Tami was who she looked up to. She would follow her around for the most part.

Since she followed her sister around is how she met her husband. Many people told her to not go to the house because it was “bad” or like a “party house.” But Toni being the rebellious teenager she was and following her sister anyways, was one of the best things she had ever done. Wayne and her found immediate comment interests. Wayne was in a band about to perform, and Toni was a singer as well. Toni sang in a band in highschool and had previous experience. She wanted to be like Karen Carpenter, who was an amazing singer in the 1970’s, Toni was able to pursue her little dreams by performing in Wayne’s band. Wayne and Toni  later started dating in 1975 and got married on February 5th, 1977. She continued to live here and still does currently. They later had two boys David and Danny. 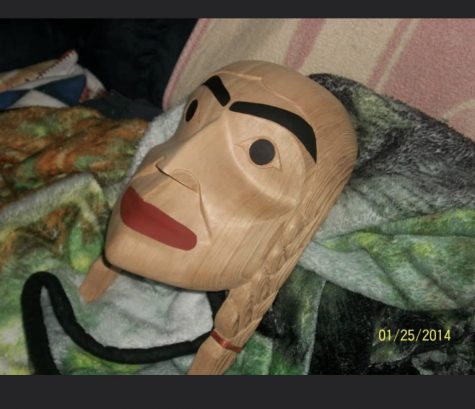 To this day, there are totem poles still being carved by Toni and Wayne outside of their house under huge tarp. They still go to Ketcikan every other summer to continue carving and telling the stories behind them.