Kindness in the Dark 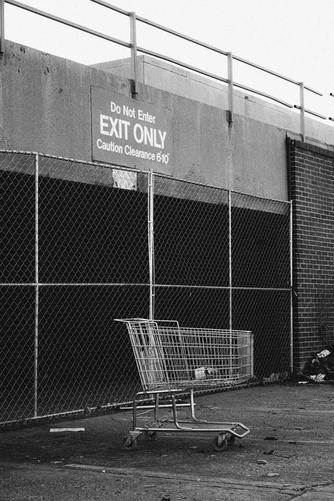 The brick building stood tall in the open, empty parking lot. The only light present was from the bright, radiant sign that loomed above. The boy squinted his eyes as he approached the entrance, and he almost missed the figure standing beside it. The boy saw the movement though, as the person lifted a cigarette. Though they stood in darkness, the boy could see their colored lips and their strange clothing. He knew to be cautious of the people around here, but he had never seen someone like this. The two stood, observing, and suddenly the boy realized he was staring. Quickly he turned away and continued through the doors.

His eyes still adjusting to the luminescence of the lights in the store, the boy began moving through the unfamiliar place, and his mind began searching for something. He paused and let out a breath as he realized that the person outside was exactly who he has always been warned about.

“The men in weird clothing,” they say. “They’ll do terrible things to you.”

He never believed the things the other boys said were true, that they were just trying to tease him, but now he began to feel fear. Was that man one of them? Is it true what they say?

He heard the doors of the store slide open. He moved from the shelf he found himself behind, and peered to see as the man now moved in towards the light. The boy pulled himself back behind the cover of the shelf, and he began to panic. His heart began to pound, and his breathing became rapid. He knew he needed to get away from that man.

He moved to the far side of the shelf, turned, and walked two, three, four more rows down. Calm down, he thought. The pulsing in his temples began to lessen, and his breathing grew more steady. The boy started to regain his thoughts, and he looked up to see a box of noodles sitting on the shelf beside him. Forgetting what he had wanted to buy for his dinner, he plucked the item from its perch, and began moving back down the aisles.

Barely giving a second look, the old woman at the cash register took the box from the boy. He stood there, anxious, fidgeting with his fingers as she fumbled with the money in her wrinkled, bone white fingers.

The boy glanced over his shoulder, and caught sight of the man, who stood in the next aisle. Almost as if having been knocked in the stomach, all of the air violently escaped the boy’s lungs. He began bouncing on his toes, and turned back to see the woman slowly, shakily, reaching out with his items. He snatched the things from her hands and turned to leave.

As swiftly as he could without being noticed, the boy started towards the doors. Peeking once more, he saw the man starting to move from where he stood. The boy sped up.

He could feel the pounding of his heart once again as he focused on the darkness beyond the doors, his escape. Ten more steps. His vision narrowed as the pounding of his feet on the ground became almost a driving force. Five steps. The boy took in a breath and held it, feeling his pulse pounding in his head. Three steps. His pace lengthened. He could almost touch the doors as they began to slide open. Out! The night air hit him like a wave – he didn’t remember it being so cold. He stood there, half shrewd in darkness taking in the night sky, and he forgot for a moment where he was going.

Something grabbed ahold of his arm. He snapped back into awareness and spun around to break free from whatever held on to him. The boy was surprised to tear away so easily, but when he looked up, he was stricken with fear. The man in the weird clothing stood just in front of him.

They now stood apart, in that dark, empty space. The boy was somehow between the man and the building, and the lights illuminated the man’s features. The boy saw nothing of what he believed he would. The man had young, kind features, and he had a fear in his eyes just as the boy himself possessed. He knew what it looked like when someone wanted to hurt him, and he knew that this wasn’t the same. Ever still, he wanted to run home, away from the store, away from the man.

The boy began to creep backwards, and his eyes searched for a way to escape.

“Wait!” A voice spoke out in the darkness.

The boy stopped and turned his gaze back to the man standing there. The man had his hands held up in front of him, as if to protect himself and to gester for the boy to stop.

“Here,” the man lifted a brown bag that he held in one of his hands. “You have a bad cut above your eye,” he shakily spoke, and pointed to a spot on the boy’s face. “You should get that patched up.”

The boy reached up, to feel there was a cut on his head. He knew he got it recently, but he had forgotten about it. Rummaging through his bag, the man pulled out a small box. “May I?” he asked. The boy saw the bandages on the box, and he nodded slightly. The spot on his head had begun to hurt. The man gestured towards a bench that stood in the light, and, forgetting of his fears, the boy went to sit there.

The boy had no more fear of this man in strange clothing. Although it badly stung when the man cleaned the wound, his touch was gentle, and his assuring voice was soothing.

As he walked back down the street with the bag of supplies the mane gave to him, the boy touched the bandage above his eye. That someone would be so nice, he thought.