Thoughts on Toxic Masculinity and Society 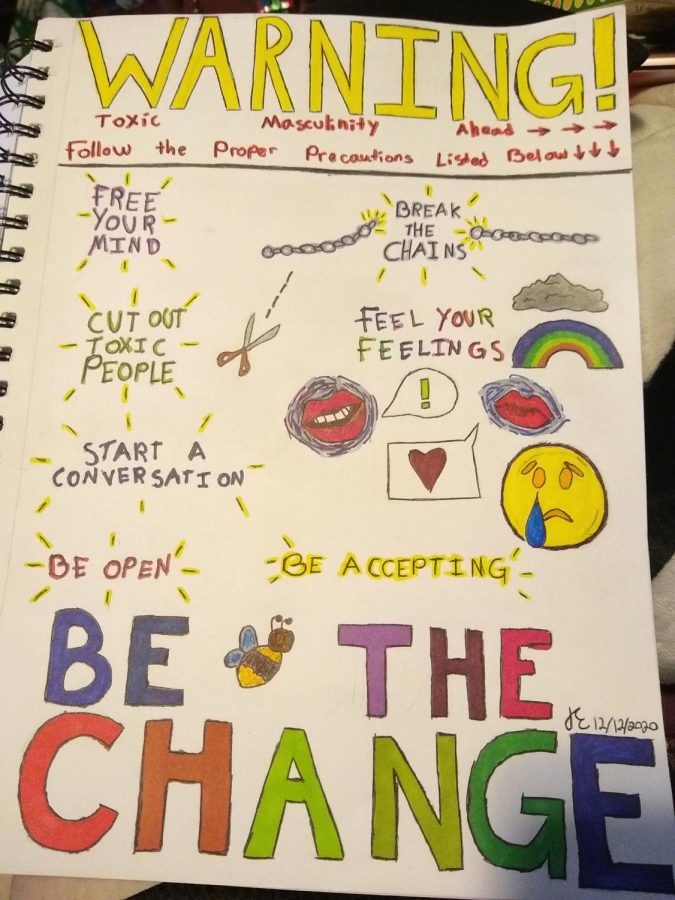 Toxic masculinity is a cultural concept that enforces in men the thought process that emotion is weak, expressing your feelings is bad, and that you have to be the ultimate, dominant alpha male to succeed and be seen as a “real man.” This can lead men to suppress their emotions and not want to be seen as vulnerable or else they’ll be seen as “too feminine,” or not “manly enough.” Toxic masculinity isn’t saying that masculinity is bad or that men are evil. It’s saying that certain aspects of masculinity can become toxic.

A lot of men are raised to think that they are supposed to be dominant and violent because “that’s how men are” or “boys will be boys,” which is often heard to excuse rape. Because men are taught to be violent and to dominate, they may commit acts of violence, including rape and sexual assault, but it can’t and should never be excused by toxic masculinity. It can be a factor of men wanting some dominance and power and it can be society’s fault for pushing that on men, but men also have to be held accountable. Men have to realize that if they were raised a certain way or instilled with toxic values, they can change.

Change is important and valuable. If men, and society in general, can change how they view masculinity, it will change our society for the better. According to Erlanger Turner in “Mental Health Among Boys and Men: When Is Masculinity Toxic?”, when men are taught to suppress their emotions, they are more likely to engage in risky and violent behaviors, which puts them at greater risk for psychological and physical health issues.

Men participating in violent acts is usually due to their pent up emotions, I think. In my personal experience, some men use humor as a way to cope with their hidden feelings; they may make jokes, brush off their feelings, and shut down any conversation that has to do with emotions. I think that’s better than expressing it in a violent and hurtful way, but it’s still not healthy. Underneath all of the jokes, however, is a lot of anger and hate that doesn’t ever get expressed in a healthy way. I think parents who shut down these important conversations with their kids are doing more harm than good. Kids shouldn’t grow up without healthy emotional outlets. I say kids specifically because kids of any gender, not just boys, should grow up in a healthy environment that won’t contribute to poor mental health later on.

The way I was raised, I know and understand that talking about your issues is healthy, but I still struggle to process and talk about what I’m feeling. I think I’m improving on that, but I do find it difficult to put myself in an emotionally vulnerable place sometimes. It’s not something that I’m constantly used to doing, and it can be awkward sometimes, but I do appreciate opening up and having someone else understand me and what I’m feeling. I do feel weak talking about it sometimes, but that’s to be expected when you put yourself in that position.

Talking about your feelings is not, and should not be seen as weak. It’s human. It’s natural. When you can’t talk about your feelings, they build up, and sometimes they can come out in an extreme emotional explosion. Others will engage in risky behaviors and unhealthy coping methods. Leah Campbell insists in her article for Healthline, “How Mental Health Stigma Affects Men.”, that instead of opening up to emotions, people will feel angry instead, and they might also feel a desire to take that anger out on others and hurt them. Built up anger and other emotions, as stated previously, may also cause mental health issues such as depression and anxiety, and often an inner self-hatred. We, as a society, have to realize that while an individual’s feelings are valid and natural and human, how that person might respond to those feelings is what actually matters. We have to teach our kids, everyone, not just males, how to express their feelings in a healthy way.

Toxic masculinity, though, is pervasive in our society and needs to be discussed in more open forums. The anxiety and pent up anger many young men may feel can lead them to violent acts. Men are usually taught to be dominant and aggressive in order to be “real men”, and naturally, if they don’t get what they want, or if they are undermined by their peers, they will lash out, fight, or worse.

One of the issues that I want to focus on is rape. According to data, men usually rape someone who they see as an easy target to asert dominance over. We have to teach men that violence and dominance isn’t the answer. It’s okay if you’re not the best, or if you’re not seen as an alpha male. You are still a man, and you shouldn’t have to feel hate or anger enough that you act on it in a horrible way. I know I say men, as I’m focusing on toxic masculinity, but really I mean anyone should be able to learn this and change from it.

Sadly, too, men are usually perceived as weak if they come out and say that they were raped or sexually assaulted. Many people think that men can’t be raped because they are naturally more physically dominant, and would be able to fight back, which isn’t the case. This goes for any abuse as well. Especially in a hetero relationship between a man and a woman, people will think that the woman isn’t capable of abuse. We should know by now that anyone is capable of committing these horrible acts and all people should  be able to speak out, seek help, and heal from these terrible crimes committed against them.

Finally, toxic masculinity is a type of social violence. Enforcing gender stereotypes on kids is harmful. Boys and men shouldn’t always have to be strong and stoic, and girls and women don’t have to be overly feminine and subservient (unless, of course, they are doing these things because they want to, and they aren’t hurting anyone else in the process). I know toxic femininity is also a thing, but I feel that we have paid much more attention to working on those issues than we have working to eliminate toxic masculinity.

Initially, I had a different intent for this paper, but after doing some research and writing a little bit about toxic masculinity, I think I really want to just open up space for conversation. I asked a few people close to me what they thought about toxic masculinity and I ended up having a somewhat deep conversation (not too deep, as this person didn’t feel comfortable sharing too much about their emotions) with a guy who is close to me. I’m glad I had that conversation, because it helped me to understand more on why some people don’t express emotion.

I encourage anyone reading this to also make a space for this conversation, or a conversation on any other important topic. If it’s educational and informative, great! If it’s just getting a deeper understanding of the person you are talking to, also great! Either way, make time for important conversations to happen. Talking about things we need to change is the first step to actually changing.